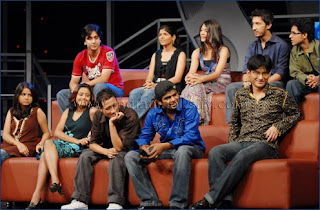 Sony TV would have little expected the response that the third series of Indian idol has generated among the public. The TV show has directly managed to achieve what was urgently needed – to bring a region that has long been neglected by the mainstream media and the press into the limelight at least for a few weeks.

What talent shows like Indian idol do is offer the Indian public some change form boring television serials that constantly show the Indian women in extravagant attire and long bindis backbiting and plotting against each other. I have little knowledge of music and am in no position to comment on the relative talents of singers who were part of this series and compare their abilities with people who were part of other like shows.

I vaguely remember watching the first series of the show and how the song ‘Mohabatten Lutaoonga’ was on everybody’s lips. Abhijeet has had some success so far but a start was made for Indian television nevertheless. I did not watch the second series but when this third series started, I was glued to it right from the preliminary stage of the show.

The show had its share of drama with Richa and Suhit – the former, a girl about whom the public seemed undecided as they could not figure out whether she was childish or putting on an act and the latter a stylish Delhi lad who had the attitude but not the matching talent to get him through. Ankita and Chang are two contestants the public would have found hard to vote out because of their very personalities. Ankita, a STD XII student made almost every judge dance with her boyish approach and choice of songs. Chang, a professional dentist whose ancestors are Chinese impressed all the judges with his mastery of pronunciation and originality of voice.

Among others, Abhishek from Bangalore could have been a dark horse but had only himself to blame for getting voted out. Parleen had a charming personality but couldn’t raise his standards when it was required. Deepali and Charu were unlucky to be voted out early in the finals. I was most impressed by Deepali as she was able to live up the judges’ expectation but couldn’t influence the public voting to stay in the contest.

Each contestant that made to the top twelve deserved their place. From there, it was one elimination each week ending in a final that saw three young boys vying for the top spot.

Most girls felt that the talent of the boys who made it to the finals was superior while the views of the boys was more in accordance with the judges and ultimately this got reflected in the early elimination of many girls.

Emon with his likeness to Sonu Nigam certainly deserved his place in the top three. Amit Paul from Shillong was too good in every department in which the contestants were judged but had to be satisfied with the second place ultimately. Prashant Tamang, a police constable from Darjeeling with no professional learning has finally bagged the title and his triumph means the north east has finally something to cheer.

The response and enthusiasm that the contest has managed to inspire in the people there makes one feel that it is still not late to make an effort towards lending an ear to their genuine concerns and addressing them.

The Indian public’s response to the show is understandable as they see ‘one among them’ trying to live out his/her dreams. So, the public laughed and cried with the contestants and discussed their favorite idols’ in their living rooms. It gives the common man hope that if he dreams big and works hard, his dreams too can one day see the light of the day.
Posted by Shiva

Hello Everybody,
My name is Mrs Sharon Sim. I live in Singapore and i am a happy woman today? and i told my self that any lender that rescue my family from our poor situation, i will refer any person that is looking for loan to him, he gave me happiness to me and my family, i was in need of a loan of $250,000.00 to start my life all over as i am a single mother with 3 kids I met this honest and GOD fearing man loan lender that help me with a loan of $250,000.00 SG. Dollar, he is a GOD fearing man, if you are in need of loan and you will pay back the loan please contact him tell him that is Mrs Sharon, that refer you to him. contact Dr Purva Pius,via email:(urgentloan22@gmail.com) Thank you.