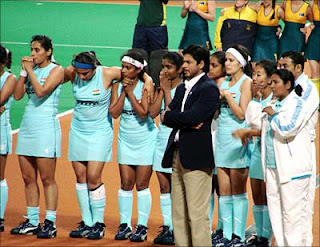 When my friends suggested that I see ‘Chak De’, I thought ‘why should I?’ as at the outset it seemed like another masala movie in which the aged hero romances girls half his age.

The first half of the movie is a little too dramatic but the second half more than compensates with its doses of reality. Hindi cinema has of late made some bold starts with respect to the subjects it has chosen to handle but they have not been met with expected appreciation and encouragement. Movies like Swadesh, Black, Water and Omkara have proved that our filmmakers are not afraid to experiment at the cost of commercial losses.

Chak De does what very few movies have managed to do. It has the potential to make the average Indian movie-goer question his stereotypical mindset when it comes to the abilities of the sexes.

Shahrukh deserves some praise for boldly accepting to play the hockey coach of a girls’ team. In his own style, he has done credit to the role and is in most part responsible for the movie’s success. The hockey stick wielding girls have fit their roles perfectly and one is able to believe when they doubt their abilities and cheer when they defy stereotypes and beat odds.

What is the reaction of friends, lovers and parents when women want to make it big in their careers? What is the status of a sport that so badly needs encouragement if it has to be in the nation’s consciousness? Ingrained societal outlook is challenged in the movie and that is why it deserves to be seen.

The girls have managed to portray emotions to the right degrees and the viewer is forced to cheer and laugh with them when they prove to the world that if they believe in themselves, they can accomplish what they aspire to. Special mention should be of Vidya Malwade and Chitrashi Rawat who play the Captain and young forward respectively.

A movie well worth the time spent…
Posted by Shiva

Hello Everybody,
My name is Mrs Sharon Sim. I live in Singapore and i am a happy woman today? and i told my self that any lender that rescue my family from our poor situation, i will refer any person that is looking for loan to him, he gave me happiness to me and my family, i was in need of a loan of $250,000.00 to start my life all over as i am a single mother with 3 kids I met this honest and GOD fearing man loan lender that help me with a loan of $250,000.00 SG. Dollar, he is a GOD fearing man, if you are in need of loan and you will pay back the loan please contact him tell him that is Mrs Sharon, that refer you to him. contact Dr Purva Pius,via email:(urgentloan22@gmail.com) Thank you.